Teach Us To Pray; for our teachers

By Jacob DeCroesMarch 11, 2020No Comments

I urge, then, first of all, that petitions, prayers, intercession and thanksgiving be made for all people— for kings and all those in authority, that we may live peaceful and quiet lives in all godliness and holiness.

“Teaching is the hardest job everyone thinks they can do.” As a middle school teacher who follows several “teacher pages” on social media, I see this quote plastered on colorful backgrounds with fancy fonts fairly often. While it is certainly a thought-provoking message, I can’t help but disagree. Teaching is easy. Give me some knowledge, and I will impart it. I can toss together a lesson plan with higher-level thinking indicators and cross-curricular standards like nobody’s business.

Being a teacher, however, is a different story. Being a teacher means being a leader. Being a leader is hard. I spent countless hours in college devouring history books, analyzing every move famous historical figures made. I looked at the significance of why John Brown chose to carry out certain actions on Sundays, turning those analyses into learning objectives and lesson plans. I did it with pizzazz. Clearly, I was going to have children standing on their desks reciting “O Captain, My Captain” in no time. I then started my student teaching and, although nobody stood on their desk to recite poetry, things were every bit as easy as I expected… until October 23rd.

On October 23rd, I showed up for student teaching ready to knock the historical socks off of my 7th-grade students like I had been doing for the past couple of months. But, I was immediately stopped by my visibly shaken supervising teacher. The father of one of my students had been shot and killed in cold blood in the middle of the street the night before, and she had shown up for school today. Nothing in my expertly crafted lesson plan had accounted for handling the immediate aftermath of a student losing a parent. Quite the opposite, actually. The day’s lesson was on Egyptian mummification and largely centered around looking at pictures of dead bodies. All those hours of intricately tying content standards with fun activities and measurable learning objectives failed me. I had no idea what I was supposed to do.

The following year I had my own classroom, and things were going as well as could be expected when another tragedy struck. The mother of a student died by suicide, and just like my previous student, that student showed up for school the next day. Once again, it did not matter how well I had written my lesson plan. It did not matter that I had planned a fun activity. Once again, I had no idea what I was supposed to do.

A few years later, I found myself sitting on my couch enjoying some much-needed rest and relaxation when my wife gave me a look similar to the one my student teaching supervisor gave me after the death of my’s student’s father. She then showed me a Star Press article announcing the arrest of one of my former students. A student who had a story that would make you tear up if you heard it. A student who had everything going against him his entire life. A student whose circumstances led him to a habit of making bad choices. A student who I could not help but love. He had been arrested for murder. For whatever reason, I looked at the article’s comments and was horrified to see the angry mob calling for this poor child’s head. I so badly wanted to fix it. I had no idea what I was supposed to do.

Daily Prayer
Heavenly Father,
Help us to support our leaders
Grant them wisdom to face challenges
Remind us to follow your examples of love.
Amen 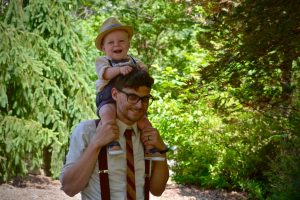 Jacob DeCroes has been attending Commonway for a little over a year. He began teaching 7th grade social studies at Yorktown Middle School this year after spending the previous six with Muncie Community Schools at Wilson and Southside. He loves spending time with his high school sweetheart (and fellow Yorktown Teacher) Alyssa and their son Grayson.

We apologize for the misprint in yesterday’s blog. The author was Ryan Gernand, not Jeremy Neckers. (Hopefully, you read to the end and saw his bio and realized the error we had made!)

Jacob DeCroes has been attending Commonway for a little over a year. He began teaching 7th grade social studies at Yorktown Middle School this year after spending the previous six with Muncie Community Schools at Wilson and Southside. He loves spending time with his high school sweetheart (and fellow Yorktown Teacher) Alyssa and their son Grayson.